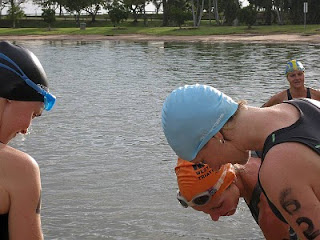 Due to the weather conditions it appears a number of people elected to stay in bed rather than head down for the Enduro. With the lake being closed, Race Director Col Smith planned a 3km run, 10km ride and 3km run. As competitors were out running the first 3km, Col decided to call off the ride leg due to the very wet conditions. So our versatile athletes just continued on and did a second 3km run. Everyone seemed to enjoy the event but of course were a little disappointed they couldn’t have a ride as well. Thanks to RD Col Smith and those hardy souls who assisted with the running of the event.

Lets hope the weather gods are kind for our annual Womens & Sprint Series coming up next.

Junior race this weekend is at Lake Alex as usual. Registration from 7.20 am for 8.00 start. Waiting to hear back from the council on Friday re quality of water to see if the lake is open – in the event it’s closed, RD Nerida will provide an alternative format. This is the last chance for juniors 12 and above to have a hit out for the upcoming NT Champs on 21 March.

3. Items for E News or requests for re runs by 8pm Sunday please.

1. Our Ironman Malaysia competitors are all recovering. Spare a thought for Blue Watt who missed a slot for Hawaii by one place when there was a roll down. Grant Preddy's effort in his first Ironman was marred by two punctures. The first at the 100km mark and next with about 40km to go. Having used his spare, Grant rode in on the flat, Ouch !

2. Entries are open online for the Gold Coast Half Ironman (3 October 2010)

4. 21 year old Alistair Brownlee, who dominated the 2009 ITU World Championship Series with a perfect 5-for-5 season, is out the first two races of the season with stress fracture of the femur.

5. It is with sadness Triathlon Australia informs us of the death of TA member and rising star of the sport Renee Nicholls. Renee, 27, was hit by a car while training on the Gold Coast over the weekend and decision was then made to remove life support. She was a member of the Southport Triathlon Club and achieved podium finishes at Geelong 70.3 and Ironman Australia. At the 2009 Ironman World Championships in Hawaii she won her age group by nine minutes, prompting her to recently take out a Long Course Professional Licence. Renee was an ADF member. We join the rest of the triathlon community in offering our condolences to Renee's family and friends.

6. Busy weekend coming up in Alice Springs. The Alice Tri Club has their Ultimate Ride Teams Challenge on Saturday followed by Race 3 of their Sprint Series on Sunday. If you are down that way, they would love to see you racing.

7. A Jerome update: He is still breathing (barely), was in Paris with Marianne then heading to San Diego in California for a conference then back to Paris for a week and back to Reunion Island! Not much time for triathlon in that lifestyle !

8. Good luck to those racing in Ironman New Zealand this weekend. Rachel De Zoete, Andy Jones and Lucie Hardiman will all be in action.

9. Last Sunday night, Craig and Nerida Alexander, and four (4) of their neighbours were broken into and a large number of items were stolen, including Craig's bikes, a car, scooter, surf boards, golf clubs, tools etc. Both of Craig's Orbea bikes (road and time trial/racing bike) were stolen, together with a bunch of other bike/cycling equipement.

We are looking for your assistance to spread these details far and wide. If you are offered or hear of anyone trying to off load the bikes please call Crime Stoppers on 1800 333 000. It is felt that flooding the market with details for such a unique bike may help it be recovered and perhaps lessen the chance of this happening to others. Thanks for your anticipated assistance.

Craig's race bike: Black 51 cm ORBEA ORDU bike: This bike is very unique as there are only a handful of bikes in Australia that have the Shimano Di2 electronic group sets on it. It also has a Shimano Prototype SRM power meter installed on the bike. This is distinctive by looking at the crank drive arm. This is the only one in Australia and there are only a handful in the world.

YOU KNOW YOU ARE A TRIATHLETE WHEN...

... some of your toes are black, you have a peeling forehead and a week later you still have a swollen arm from jellyfish stings
... you couldn't force another gu down even if your life depended on it
... you swear this year you are going to pay more attention to nutrition and flexibility (again)