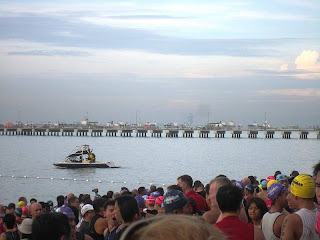 Darwin Triathlon Club was very much in evidence in the Singapore 70.3 over the weekend. We had five podium places (see results below) which is a great indication of the strength of our club.

Our Ray White Darwin 2011 NT Sprint Distance Championships take place this weekend at Lake Alexander and the field is looking good with a number of interstaters as well as athletes from Katherine and Alice Springs heading up to join us. More info on the weekend below.

Enter: Online only at www.triathlonnt.com.au ($25 individual, $30 team of two; $45 team of three) Must be current TA member to complete.

Please note: There is no short distance option - if the distance is too much for you, suggest you team up.

Update re Lake Alexander closure: Further testing of Lake Alexander was carried out yesterday. Tests results will be known later this week. Should Lake Alex remain closed a run, bike, run format will be used.

Enter: Online only at www.triathlonnt.com.au ($15) Must be a current TA member to compete

1. Entry: Australian competitors must be a current TA member to compete http://www.arafuragames.nt.gov.au/accreditation/registration/

1. Spare a thought for Vincent Gilly .. in top form, lined up for the swim in Singapore and two steps later he did a calf muscle. Didn't even get wet. We wish Vincent a speedy recovery.

2. We have a number of interstate competitors competing in the NT Sprint Distance Championships this weekend and we know they will be given a warm welcome to the Top End. Ditto those from Alice Springs & Katherine.

3. More on Singapore ... Rob Brooks is minus a bike time ! His timing chip came off in T1 and luckily he noticed it when he racked in T2.

4. The Darwin crew racing in Singapore were loudly encouraged by a fantastic group of supporters.

5. We encourage you to support Japanese Pro Athletes Maki and Hiro Nishiuchi as they fundraise for the Japanese Red Cross. The couple raced the Aviva Ironman 70.3 Singapore sporting black bands, a Japanese tradition of mourning.

The couple have come forward to raise funds for their homeland with their cousin and elderly relative still missing. Hiro said, “My family is still stuck at the Fukushima Prefecture despite the nuclear threat. I hope to do something for my country. A friend of mine watches Japan news all day long and is in despair each time the newscaster reports an aftershock or about the nuclear situation. I would like to raise funds for the earthquake victims, and have 100% of the donations go to Japan.”

You can support Hiro and Maki Nishiuchi by donating to the Japanese Red Cross now via the link at www.ironman703singapore.com Title Sponsor Aviva kick-started the fundraising effort with S$10,000 donation.

6. We had our final race of the junior series on Sunday. We had a good turn out and RD John Thyne put the kids through a challenging duathlon format. A very yummy bacon and egg breakfast followed along with presentations. A big thank you to our junior sponsor NT Elite Cycles who donated very generous 1st, 2nd and 3rd prizes to the Boys and Girls pointscore place getters & also provided some additional lucky draw prizes.

7. Those heading for the Mooloolaba Triathlon (Australian OD Championships) include Monica Stewart, Craig Garland, Korgan Hucent, Faith Marshall, Heath Porter and Jac Crofton. Monica is in great form and looking to make it two out of two series wins in her age group.

8. Chad Anderson will be competing in the Continental Cup section of the Mooloolaba festival. Conti Cups are entry level events for athletes chasing ITU points to gain starts in world cups and World Championship Series events so lets hope this one gets Chad underway points wise. His wave is also draft legal as is the World Cup later in the afternoon. I believe the Conti Cup does the same course as the age group field, but the World Cup event is a multi lap affair. Whatever, it's going to be an exciting day for our athletes and we wish them all good luck and calm conditions.